The Upper East Side is known for being affluent and wealthy, especially by those who watched the show Gossip Girl. However, it wasn't always this way. Until the 1850's the area was basically unpopulated, until the plan of Central Park was the first development of the area. The park was created to support a vastly increasing population, and to help the mayor at the time, Fernando Wood, get re-election. In the late 1800's, more and more town houses and tenements were created in the area as more mass transit began to reach the upper parts of the island. By the late 1890's, the area was literally "the wrong side of the tracks". Park Avenue's steam trains brought pollution and noise to the center of north east Manhattan. Around the turn of the century, there were several mansions that were built on Fifth Avenue that have since been demolished or turned into museums. They were replaced by high rises in two parts, one during the twenties, and one right after World War II. The high rise construction has continued until present day, and the area is now densely populated and one of the fanciest and most expensive in Manhattan.

The Metropolitan Museum of Art
One of the city's most famous museums, this huge museum houses works of art from the ancient Egyptians to the Impressionists to the Alexander McQueen show that had lines of people wait for two hours to get in. Construction originally began in 1874, and new wings and other additions have been built periodically ever since. Even today, the outer part of the museum, its fountains, are being redone and are hidden from the public. This is a fixture in New York City and gives off the feeling of a wise grandpa.

Yorkville, which is usually considered a part of the Upper East Side, was originally named for the village near 86th Street and 3rd Avenue. In later years, (late 19th and early 20th Century), the village became the main area for German- American residents of the city. It was filled with shops, restaurants and churches that all had German roots, and in the 1930's it was the site of the German- American Bund parade. Throughout the 20th Century, other central and eastern Europeans began to settle in the area, and there are still a few Czech and Hungarian store fronts in existence. Today, the area is nothing like a village, and is filled with many high rises and 86th Street is known for its many huge chain stores. 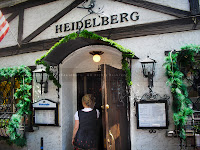 Heidelberg
The self- proclaimed "favorite Biergarten of Manhattan", this is an old and seemingly classic German restaurant. The building looks like a small German house, and the waiters and waitresses wear lederhosen and dirndls respectively. 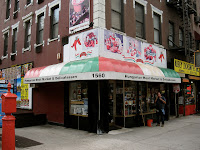 Schaller and Weber
Originally opened in 1937, this charcuterie has remained in the same location for decades. It was founded by Ferdinand Schaller (who had learned to butcher in Germany) and Tony Weber, an ambitious New Yorker. The store is still family run but sells more than meat and sausage. It sells many types of German candies, bread, jam, soap, and other items you might find in a small grocery store. It also has an impressive display of dozens of beer steins in the front window.